The TAFPro on Azure VM is a standalone VM image that can be downloaded from the Microsoft Azure Marketplace against your subscription. The image is multipurpose. This means that with simple configuration changes it can be adapted to play the roles of:

By using this image you have great flexability over your testing infrastucture, without having to install any of the supporting software. You will be able to write tests in Java for Selenium (including the use of AutoItX), save your tests in Git, build in a central Azure DevOps environment and deploy to a pool of waiting TAFPro Agents via secure SSH.

The TAFPro Agent pool is extremely flexible and can be expanded to as many Agent servers as is required to accomplish the level of test throughput required. The great advantage of the TAFPro test data management system is that test Suites can be configured into slices via the TAFPro test data filtering and executed in parallel on the Agent pool. This capability lends itself perfectly to the testing of millions of combinations of test data in the least time. It can also be used to generate load on a candidate system as part of load and performance testing. 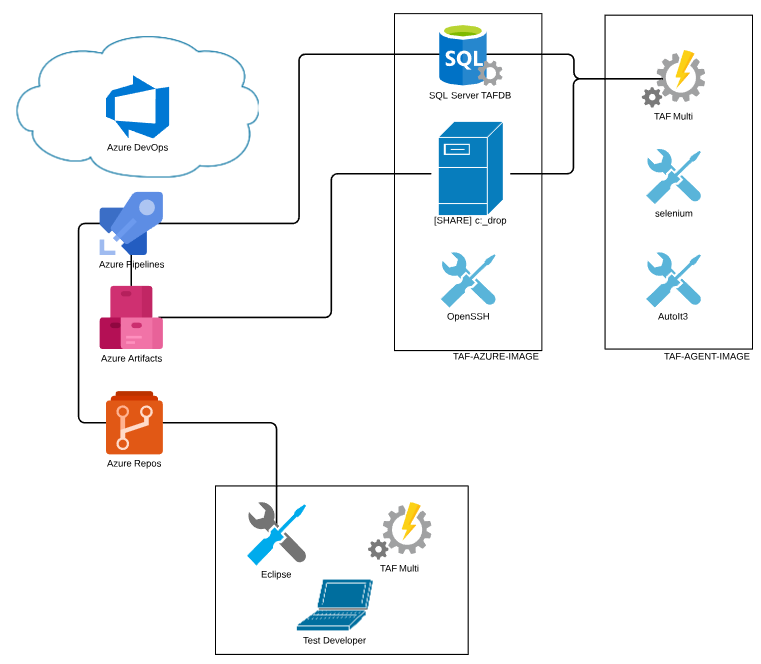 The diagram above refers to TAFPro (Multi) 6.0.0.2 showing the role of the TAFPro Agent.

The TAFPro on Azure VM comes pre-installed with Java Selenium. A working sample project shows you how Java test projects in Eclipse fit into TAFPro. The system is in a “ready-to-code” state and can be expanded to encompass your own test objectives quickly. Further documentation about TAFPro is available on the server.

AutoItX is the AutoIt core technology that is quick and convenient to access directly from your Java language tests. As Selenium does not handle Windows pop-ups, dialogs, file uploads or downloads, AutoItX is the way to handle these. It will fill in Windows fields and click Windows dialog controls.

Robot Framework is a popular keyword based test scripting system that can be used with Python version Selenium. We have a ‘ready-to-code” working sample project using RED in Eclipse that shows how easy it is to write and run Robot tests from TAFPro.

Once your TAFPro on Azure server has been deployed from the Marketplace you can log into it as the pre-canned Demonstration Account. There are three main demonstrations, one for Selenium, AutoIt and Robot.

As the Primary Administrator on your server you may change this password at any time. On the TAFDemo desktop you will find a PDF document that will lead you through the relevant technology demo using the pre-installed TAFPro.